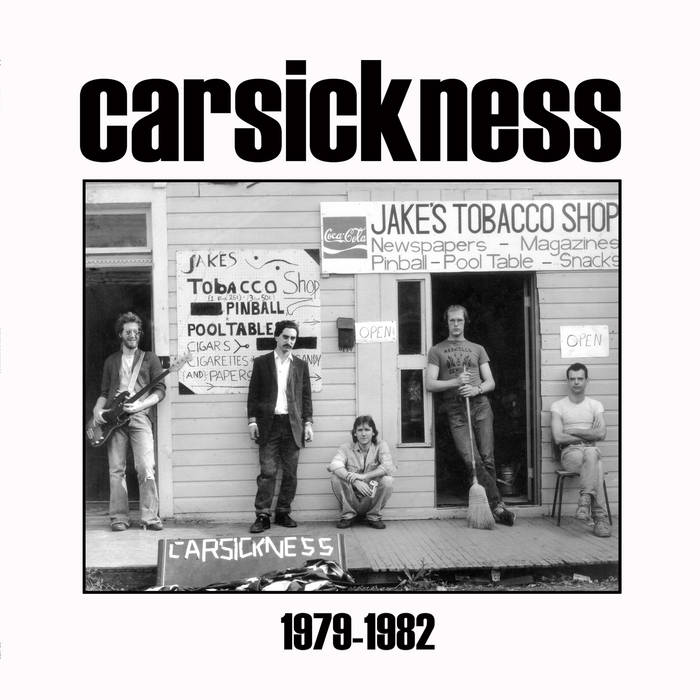 The classic Pittsburgh punk rock band that reeked havoc on the streets during the height of the punk era has returned! Carsickness has re-issued some of their most popular songs like “Bill Wilkinson,” “Police Dog,” and “For You” on a vinyl entitled 1979-1982. It also includes never-before-heard tracks, like “I Don’t Think So” which didn’t make the cut for the “Sharpen Up For Duty” album.

Carsickness formed in Pittsburgh, PA in 1979 during the height of punk rock—a time when bands like the Ramones, The Clash, and The Sex Pistols were taking over the world. However, in Pittsburgh, there was a different kind of punk scene catching on, and Carsickness spearheading it. Their sound takes the rhythmically reckless speeds of punk rock and combines it with more complicated symphonic melodies creating tracks that make you want to sway and shout all at the same time.

Starting off as a punk trio with Karl Mullen on guitar and vocals, Steve Sciulli on synthesizer and miscellany, and Dennis Childers on drums the band transformed with the addition of Chris Koenigsberg on bass, Dan Roelich on Saxophone, and Hans Werner on guitar and keyboards to become the punk rock orchestra of the ages.

Their first show was in 1980, originally scheduled to be at Pittsburgh’s Mattress Factory, a contemporary art museum. However, Carsickness not only forgot to put the place, time, and date on their flyers, the museum also got nervous about the band’s hardcore reputation and, on the day of the show, canceled. Fortunately, it was rescheduled at a venue called Lions Walk for what turned out to be a sold-out show.

During the height of their popularity, they were one of the first Pittsburgh punk bands to tour often outside of the city, moving the scene that was blossoming there forward to inspire bands such as Anti-Flag and Michael Chabon’s The Bats. “The music scene itself was bigger than us as individuals,” Childers always says.

In 1987, the band started to slowly dissipate due to different individual pursuits and in 1989 they called it quits. However, Carsickness never died, the former band mates still played sporadic shows together and formed other musical projects and bands. Now, they can still be found playing shows and living a punk rock lifestyle.

Though they have spread out to different cities, with few still living in Pittsburgh (Childers and Sciulli still play together in Pittsburgh but in a new basement), they never lost touch. Now, in 2017, the sounds that were once described to “punch holes in your brain” are being reissued and the world better get ready!