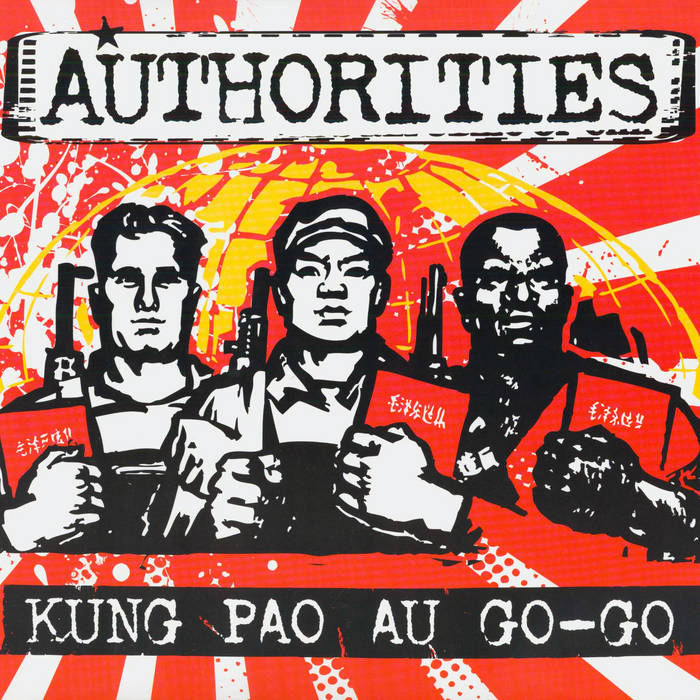 ☆R●gR4f☆ ...personally im in the long list of individuals who feel interest in these Sirens of Stocktons output could never see end! ♡The Authorities♡ who btw have a pretty crazy ode to that which plagues the nation....check yhese guys out...PigboxVia PeAcE an Sh0ve♧janks Favorite track: Battle Hymn.

The latest studio album by Stockton, California punk rock legends The Authorities. Recorded in 2010/11 at 3110 Studios in Vancouver, BC. Produced by Brian Barr and mixed by David Carswell (New Pornographers, Destroyer, the Evaporators). Featuring a guest appearance by Joe Shithead Keithley of DOA.

The Authorities formed in Stockton, California, a nasty working class port city, on the San Joaquin River. The town was known for a couple of jazz guys – Gil Evans grew up there, and it’s where Dave Brubeck went to college, Chris Isaak, was still looking for the perfect bowling shirt at the Veteran’s Outlet, and Pavement was something you planted your face into when the vodka kicked in. Nick Kappos and Brian Thalken were a couple of bored teenos who decided pick up bass and guitar, respectively, and they found one of a string of drummers and launched the Authorities. They played their first gig on February 2, 1979, the day Sid Vicious died, at Stuar Larson High School in Stockton, followed by a slough of gigs in any shitty dive that would have them.

In time Thalken jumped ship for the Fall of Christianity, a band that also featured Gary Young, later the original drummer for Pavement. Kappos switched to guitar, and learned his craft by playing along to old Ventures albums at 45 r.p.m., along with a steady diet of Captain Beefheart and Throbbing Gristle. He recruited Curt Hall and at one point, a gig-gone-wrong openting for The Rocky Horror Picture Show at a Stockton theater, which culminated with Kappos getting arrested by Stockton P.D. just as the band kicked into one of its signature songs, “I Hate Cops.”

After the Fall of Christianity crashed and burned, Thalken rejoined, and the band recorded the sessions that would result in its now-coveted Soundtrack for Trouble EP, which included “I Hate Cops,” “Achtung!,” “Shot in the Head” and “Radiationmasturbation.” Other songs from that session, along with stuff they’d recorded in Gary Young’s garage, ended up on the Puppy Love album. The band’s material has appeared on numerous punk compilations, including We Got Power, Copulation and Killed by Death vol. 1.

The band went on hold when Hall and Thalken left town to attend college. Nick Kappos passed away in April of 1989 putting the band on ice until 1995 when Hall and Thalken reunited to record the Bourbon Decay EP at Gary Young’s Louder Than You Think studio in Linden, CA, located in the orchards east of Stockton. They got together to play sporadically until reuniting again in 2010.

And three decades after inception, the band has a new album, Kung Pao Au-Go Go, on the Get Hip Recordings label. Kung Pao Au Go-Go is a collection of songs that were penned “back in the day” but never recorded by the band, and some written more recently by Hall and Thalken. The 13-song album features a lineup that got road-tested in 2010, when the Authorities were invited to play the All Tomorrow’s Parties festival in England, on a bill curated by Pavement. They played other shows as well including 5 additional dates in the UK and Reykjavik, Iceland, Vancouver, BC, Seattle, Portland, and Sacramento, CA. They also played a homecoming show with Pavement in their hometown of Stockton, CA. This latest edition of the Authorities includes original members Brian Thalken on guitar and Curtis Clyde Hall on vocals, along with newer members Iain Ross on guitar, Graham Johnston on bass and Evan Stuart on drums, all of whom live in Vancouver along with Thalken, who moved there in 1989.