by The Frantic Flattops 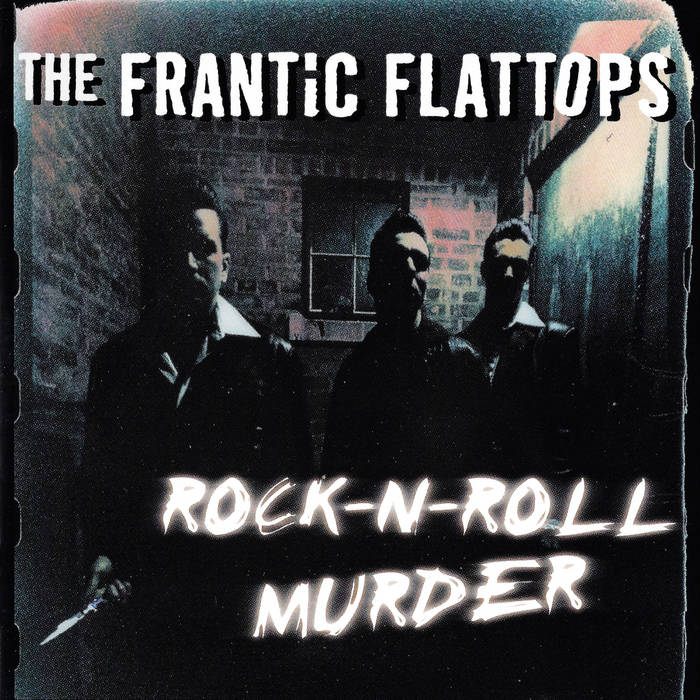 Among the seemingly innumerable rockabilly, swing and roots bands to form during the past several years, many can be called good--but only a few can claim to be great. The Frantic Flattops fit squarely in the latter category.

Although greatness is occasionally born, more often than not it’s built.The Flattops—“Frantic” Frank DeBlase on guitar, “Too Tall” Paul on drums, and Sid “Just Sid” Baker on bass—have spent eight years (and roughly 250 nights of each of those years) playing live shows. Their travels have taken them from small, obscure corners of the nation to the opening stages for Brian Setzer and Reverend Horton Heat. If you look up “road-honed” in the dictionary you’ll find the devilishly handsome, sardonically grinning mugs of the Frantic Flattops forming part of the pantheon of bands who have persistently—relentlessly—forged the path to today’s popular resurgence. Rock-N-Roll Murder is the Flattops’“junior” effort, their third album, and it’s another fully formed chapter in the band’s fascinating and joyful evolution.

With their debut album, Hi Fi Honey (1994), the Flattops presented the world with what they were at the time: a straight-ahead, greasy, nasty rockabilly band. When the Flattops went into the studio to make their second record, Cheap Women, Cheap Booze, Cheaper Thrills (1997), influences from their youth—bands like Thin Lizzy, Motorhead, the Ramones, and the Damned--had begun to infiltrate the band’s creative process. What resulted was the same lowdown blast of rock n’ roll crankcase oil, but there was a new fullness to the repertoire. What was once a hard-driving, revved-up rockabilly band became a hard-driving, revved-up, full-fledged Rock n’ Roll outfit.

Rock-N-Roll Murder is the result of this transformation. Rockabilly riffs morph into metal on “Lowdown,” then careen into walls of Sex Pistols’ style punk rock on “All I Wanna Do.” DeBlase and crew veer off into swing territory, complete with gorgeous horn arrangements, on “Sugar Daddy” while DeBlase’s voice steers through the band’s varied musical landscape like a teenager on a joy ride. He screams like Bon Scott one moment and croons like Elvis the next on the Western ballad “Trail of Tears.” DeBlase finds beauty in desperation on hard-luck ballads like “Mark of the Squealer” and “Redemption Blues,” where Sunday night becomes a time of serious reckoning.

Check out the Flattops--live or on record--and you’ll know that while today’s swing may be a passing fad, Rock n’ Roll Frantic Flattops style is here to stay!