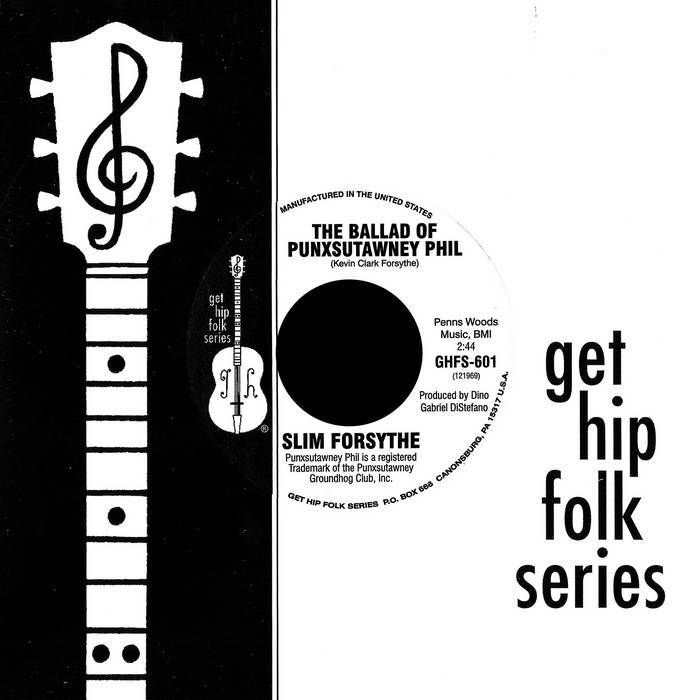 Just in time for Groundhog Day, Get Hip Folk Series presents a double helping of Allegheny Co. Americana, courtesy of the inimitable Steel City storyteller, Slim Forsythe--with a little help from Pittsburgh country crooner Molly Alphabet. We’ll let ol’ Slim tell you about it in his own words:

“The Ballad of Punxsutawney Phil”

“I owe this song to Jill Morgan. She called me on the phone one day, said she was listening to a radio show ‘call-in’ segment on the topic of songs about holiday animals. She said to me: ‘You should write a song about Punxsutawney Phil!’

“I thought about it for a week or so, and then one day, this song began to drop into my head! I wrote it late in 2012 or early 2013. Jimmy Nied pitched it to some of his friends who work each year on the Groundhog Day stage show, and on February 2, 2014, I performed it live on Gobbler's Knob in Punxsutawney, Pennsylvania. I will return to Punxsutawney for my fourth appearance on Gobbler's Knob on February 2, 2018, with Zack Keim and the four fiddlin' sisters from South Side Pittsburgh: Queen of the West!”

“Down on My Knees at Nied’s Hotel Again”

“The idea of this song floated in my mind throughout the summer and fall of 2007, then winter and spring the following year--but only as a loose constellation of ideas and phrases. Then: it was Memorial Day Weekend 2008. Several of the (then) members my band, the Parklane Drifters, were staying overnight at the home of bassist Candy Mountain. We had practiced late into the night preparing for a recording session which was to take place right there in Candy's living room the next day. I woke up early, on the couch, in desperate need of my morning cup of coffee. Finding none in the unfamiliar kitchen, I ventured outside and walked down the street to a small coffee shop.

“Upon returning to Candy's house, I realized that I’d locked myself out! I stood on the back porch, not wanting to wake anyone and knowing that the dog would eventually emerge to do his morning business. I stood there and waited, and of course, it began to rain. That’s when the song came down upon me, too; it came in clusters. When I finally got back in the house about a half hour later, I scribbled the song down in pencil on a paper bag on the kitchen counter. I still have that bag in the Slim Forsythe Museum.

“That rainy day back in May 2008, we laid down the basic rhythm tracks for what became my first full-length album, Bury Me Up on That Northern Tier. But the song I had just written on the back porch would have to wait for my second album (released in December 2011) to which it gave the title track. On that first recorded version, I sang it alone. Three-and-a-half years later it was prominently featured on my TV show, Live From Nied’s Hotel, as a duet with Molly Alphabet. That is the version that appears today on this B-side.”

Both tracks are included on the compilation album Slim Forsythe’s Greatest Hits (GH-1181), available now on CD and digital—only on Get Hip Recordings!

If you like The Ballad of Punxsutawney Phil / Down on My Knees at Nied's Hotel Again, you may also like: